This is an amazing story about some of the cool work going on in our oceans, and the amazing tools that are used.

Full credit to the members of the Oregon Coast Aquarium. Original story and a lot of cool pictures can be found here: https://aquarium.org/aquarium-staff-spots-ufo-on-oregon-beach/

Walking along the beaches of the Oregon coast is always a bit of a treasure hunt – whether you intend it to be or not.

Sometimes it’s your dog that spots a “treasure” first, which then prompts a brief spell of tug-of-war as you pull a squishy pyrosome out of Fido’s mouth. More often, beachgoers will spot something unusual, such as a bright color in the wrack line, amongst the neutral palette that characterizes our coastline. Curiosity draws them in to investigate the object, which can be anything as ordinary as a bizarrely shaped log or as uncommon as an intact glass Japanese float.

Every once in a while, though, a found object can take a little more research to identify. Such was the case when our own Aquarium staff member, Jason King, spotted a U.F.O. near Boiler Bay State Park last month—Unidentified Floating Object, that is. “I was beach combing along the wrack line when I spotted what looked like a Frisbee under some driftwood and bull kelp. When I went in for a closer look, it appeared to be a floating portable speaker because of the Bluetooth symbol. After retrieving it and clearing some debris, I realized that it was a scientific instrument of some kind,” said King.

The yellow disk is less than a foot in diameter, with foam encompassing a smaller circular solid device. Although slightly worn from time spent at sea, the letters “OSKER” are clearly legible on the top. Fortunately, an email address accompanied by an “If Ashore Please Contact” label directed King on the next step after his discovery – sending an email enquiry. 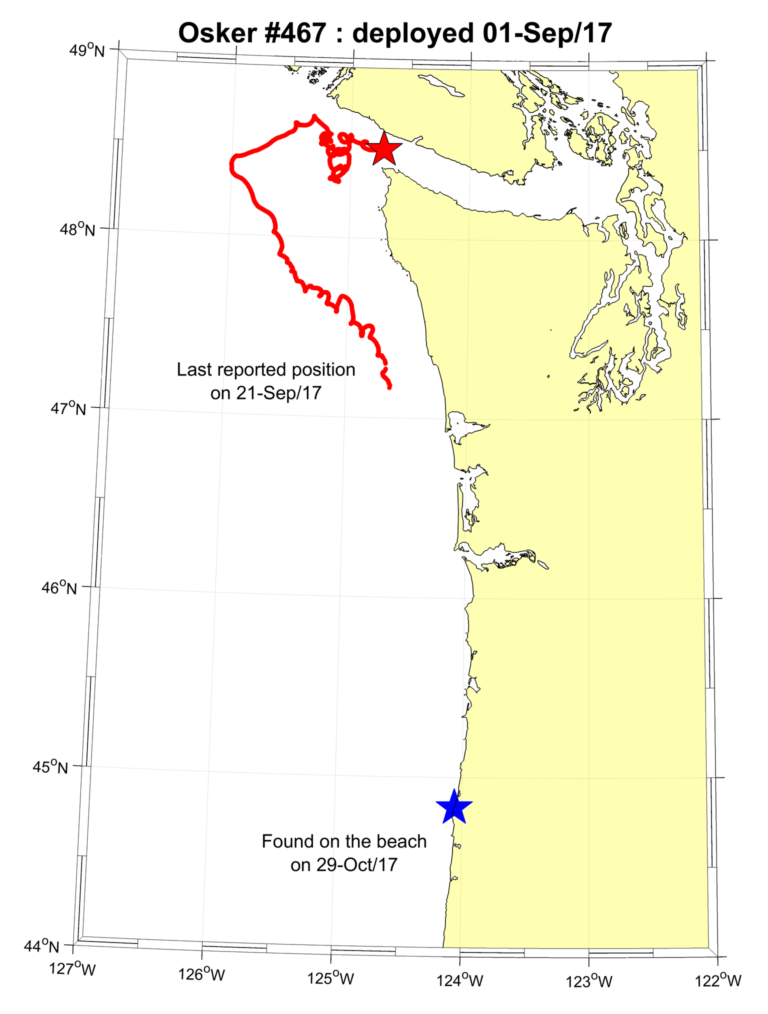 While awaiting a response, Aquarium staff—always curious about unidentified objects and organisms washing up  on Oregon’s beaches—began our own research. We found that the “OSKER” device is an Iridium Surface Tracking System made by Xeos Technology. According to the Xeos Technology website, the device provides accurate real-time tracking over an area of the water surface. It maps currents, oil spills, and other phenomenon.

We learned more fascinating information when the owner of the device, Stephen Page, Oceanographic Monitoring Coordinator for the Institute of Ocean Sciences in Sidney, BC, Canada, responded to King’s email. “The drifter you found is part of our surface circulation studies on the west coast. We use these drifters to help us calibrate oceanographic circulation models, understand surface drift and to give insights into where spills, debris or any floating item may end up,” said Page.

The Institute of Ocean Sciences deployed the drifter in Canadian waters at the mouth of the Juan de Fuca Strait on September 1, 2017. When the drifter ran out of battery on September 21, a typical running time for these devices, the scientists had already received 2800 data points. It was about one month later, on October 29, that King found the device nearly 300 miles south of its last reported location.

“These OSKER drifters are a relatively new style of drifter that we have been prototyping since the spring. Given  the right conditions, they can travel quite far, as you have already realized!” said Page. The Aquarium is sending   the device back to the Institute so that it can be refurbished for “another adventure at sea”—in Page’s words.

It is not so often that Aquarium staff find objects on the beach that they have trouble identifying – or at least can’t  just ask one of our aquarists. King’s discovery made for an interesting learning experience and helped support scientific research by our [Canadian] neighbors up north—quite the treasure. “I immediately felt a sense of joy     and accomplishment, as after many years of searching beaches for treasures, I had never found anything like it! Stephen Page and the Institute even sent me a hat for my efforts in retrieving and returning the device,” said King.