In the summer of 2018, Xeos was contacted by Dalhousie University of Halifax, Nova Scotia regarding their OSKER surface tracker.

The university was preparing for their upcoming Community-based Observing of coastal Nunatsiavut Ocean Circulation (CONOC) research in Labrador and were looking to utilize the Xeos OSKER during their project. Dalhousie, Department of Fisheries and Oceans Canada (DFO) and Marine Environmental Observation, Prediction and Response (MEOPAR) planned annual trips over a three year period to gather ocean current data.

The CONOC’s goal was to collect meaningful ocean surface current data, which is poorly observed in the Nunatsiavut region. Ocean circulation has an important role in the distribution of ocean temperatures, sea ice, biological productivity and species distributions. This information will be crucial for studying local climate change of the past few decades and going forward into the future.

Along with the different types of commercial drifters, the CONOC built drifters with the Rigolet community as apart of an annual summer school. The goal was to educate local youth about the science of ocean currents and their interaction climate change. The community aspect of the project was scheduled to run for 3 years with learning workshops every year. Discussing the scientific data retrieved each summer would assist in the educational component within the community going forward.

The annual workshops also focused on the intergenerational knowledge transfer of local coastal ocean currents from the indigenous elders to youth. Elders were asked to describe their knowledge of coastal ocean currents including direction, strength, and any seasonal changes as well as changes over time. This historical information can be compared to the newly collected ocean data to help further understand the change in local currents.

Two of our OSKERs were deployed for the project, the first on August 25th 2018 in the Rigolet narrows where it tracked surface currents every 15 minutes for over 12 hours before washing ashore. The OSKER drifters move with the near-surface ocean circulation and relay their GPS position via the low Earth orbit Iridium satellite constellation. Their location is relayed to XeosOnline, our web application our customers use to track their beacons via a mapping tool or email forwarding system. The following maps display the OSKERs tracked location and its calculated velocity during its deployment. 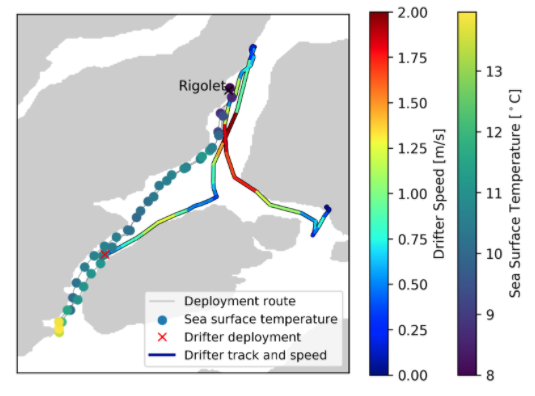 The second OSKER was deployed on August 27th 2018 off the coast of South Central Labrador in Groswater Bay. The drifter travelled down the coast of Labrador for 26 days transmitting a location every 15 minutes. The last recorded location was on September 22 before running out of power just east of the tip of Newfoundland.

Following CONOC, there will be two more research projects in the local Nunatsiavut region. First is the Coastal Ocean Monitoring in Nunatsiavut (COM-N) which will provide frequent measurements of ocean physics and chemistry along a local ferry route with a weekly repeat cycle. Second is The Community-base Observing of coastal Nunatsiavut Ocean in Winter (CONOW), this project will focus on under-ice seawater sampling during the winter months.