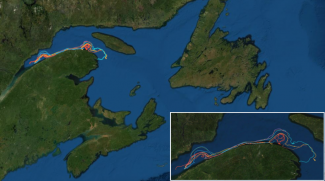 In February of 2020, Xeos was contacted by the Department of Fisheries and Oceans Canada (DFO) about their OSKER surface tracker.

DFO was planning for the Tracer Release Experiment (TRex) in collaboration with MEOPAR and the Quebec Maritime Network. The purpose of the TRex project was to develop marine dispersion observation and forecasting capabilities to assist in response to maritime contaminant incidents in coastal areas. This particular experiment took place in the Gulf of St. Lawrence.

Xeos was thrilled to supply our OSKER (Oil Spill Kit Emergency Response) to aid in this research project. The OSKER is a surface tracker that collects its GPS position and transmits the information over Iridium in small data packets. It is a small disk shaped device that features multiple tools for easy, rapid deployment. Like most Xeos Iridium devices, the OSKER has a reed switch onboard that allows the device to be activated by a magnet. To ease activation even further, Xeos added a break-away tab to connect a magnet internally. Once the tab is removed, the OSKER is on and ready to deploy. To provide a visual confirmation, a small red light will appear when successfully activated. The OSKER also features Bluetooth capability, allowing users to change GPS and Iridium transmission intervals as well as receive diagnostic information before or after deployment.

The real-time reporting of GPS positions and ease of deployment makes it a great tool to use in an oil spill or other effluent spill emergency. The OSKER follows surface currents much like effluent on the surface would during a spill.  It was designed to be used as a “first line of defense” in an emergency to give response teams an idea of where the spill might be travelling. For the TRex experiment, this was exactly the data DFO was looking for.

During Phase I of the project in summer 2020, 177 ocean surface tracking devices were deployed in the Gulf of St. Lawrence which included 10 of our own Xeos OSKERs. Along with the drifters, an inert and harmless fluorescent dye was also released simulating an effluent spill. This particular environment was chosen because coastal infrastructure in the area includes multiple high-frequency radar stations that measure surface currents in real time. The OSKERs were shown to track the surface currents accurately with some traveling as far as the West Coast of Newfoundland.

Phase II of the experiment will take place in the Gulf of St. Lawrence in spring or summer of 2021, near the Cabot Strait. This phase of the experiment will also consist of releasing an inert chemical tracer deeper into the water column to observe dispersal in this non-surface environment. The DFO will track this chemical tracer over a few years to obtain useful deep ocean data. Underwater gliders will record temperature, salinity and oxygen levels along with a micro-structure profiler that will measure turbulent mixing.

Check out the Map below to see a few of the current drifters in action!

For more information about the project, please visit http://trexstlaurent.uqar.ca/ 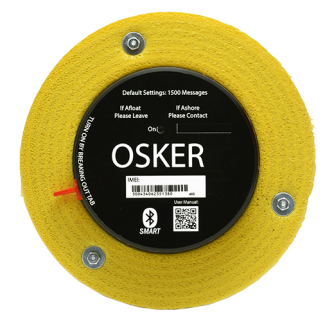